If you want to see the real Paris and steer clear of global hipsterism, overpriced smoothies, and swarms of tourists, read on. 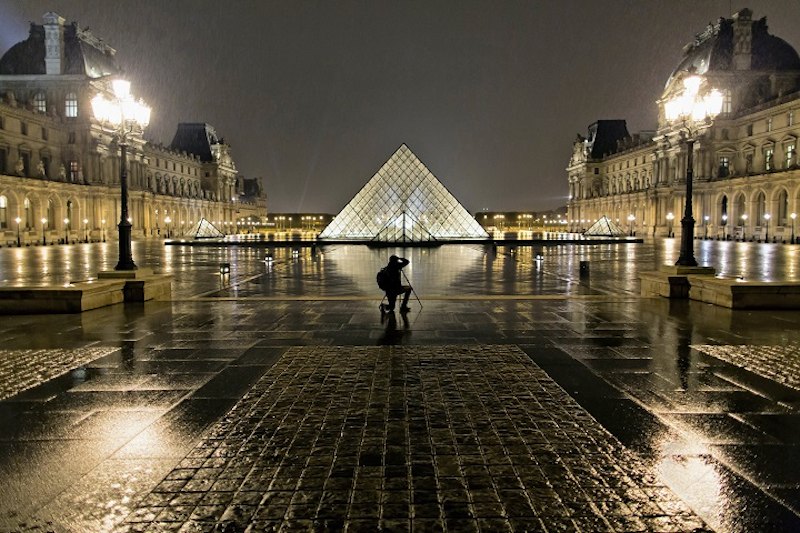 While the tense socio-political situation still grips the city, and its inhabitants remain weary, Paris is slowly but surely reclaiming its spark.

TRAVEL: The Eurostar is the best way to get there, ignore the siren call of cheap flights – the trip from the airport to the city will waste precious time and raise cortisol levels. Eurostar it and you’ll have barely finished your second glass of wine before ‘we will shortly be arriving in Gare de Nord’. Book in advance to avoid colossal fares and make sure that you arrive at least 45 minutes in advance.

STAY: either Air BnB it and aim for Montmartre, Saint Germain, 2nd or 1st arrondissement or near the Canal Saint Martin or stay in 9Hotel Republique if you’re not wanting to break the bank…but still have standards. The area itself is not great, it’s like the Leicester Square of Paris but it’s an easy launchpad for almost anywhere in Paris and cabs home. If you’re angling for more lavish lodging, stay at Le Meurice, Le Bristol or Hotel Costes. 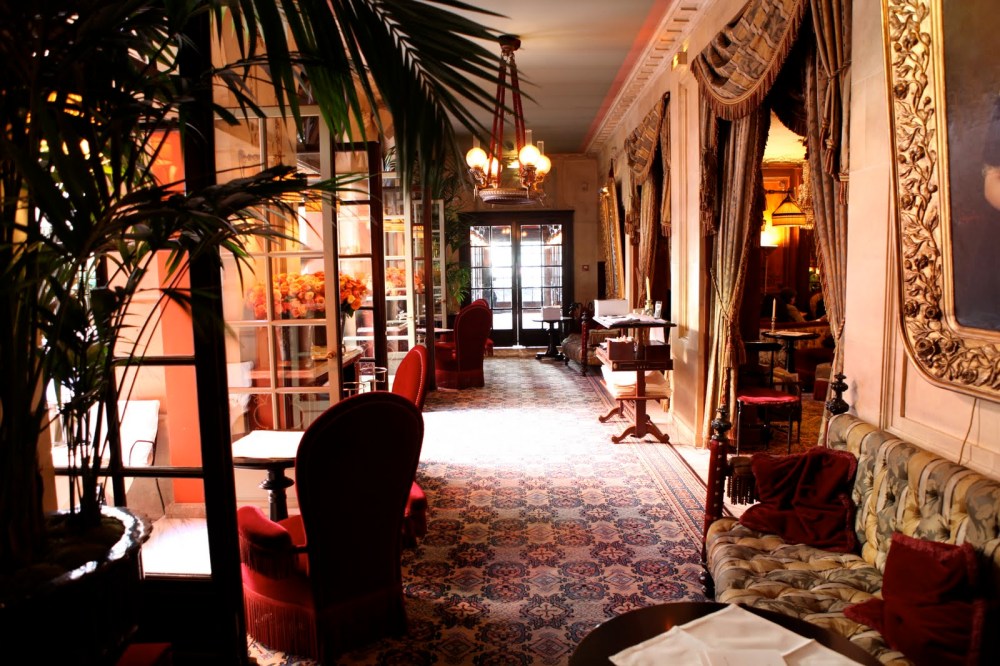 DINNER: Hotel Amour – when you book ask to sit outside or in the conservatory, cushioned by candles and palm trees comprising this oasis in the a previously ‘no-go’ of Paris. The cocktails are fun and dangerous and the food is quintessentially francais with a modern kick… and generous portions. Yes, it’s a little hipster but hasn’t lost it’s french soul. The ‘trendy’ Parisian crowd there make for exceptional people watching. If you can’t get a table, book La Belle Epoque, another smart-casual gem with mouth watering french cuisine and minimal tourism.

DRINKS: If it’s good weather, head to Le Perchoir, a chic but equally chilled out rooftop bar. If not then cocktails at KONG will give you views of the whole of Paris. Dress well, it’s smart. If you want to go out ‘dancing’, be warned that French clipboard patrol have no mercy on bad footwear, and that French women rarely dance – more an immobile bop. It’s fascinating to watch. Chez Manet is fun once you’ve braved the queue or Bagatelle.

BREAKFAST: Place du Voges for an enormous, crispy croissant – the square where Victor Hugo once lived and wrote the French epic Les Miserables for Eddie Redmayne to act out. It’s worth walking to the square as that area of le Marais is beautiful; the old Jewish Quartier of Paris with elegant French architecture and patisseries abound. Café de la Carette offers some of the best croissants and pain au chocolats in the city, and doubles up as a warming suntrap from which you can watch the world go by. 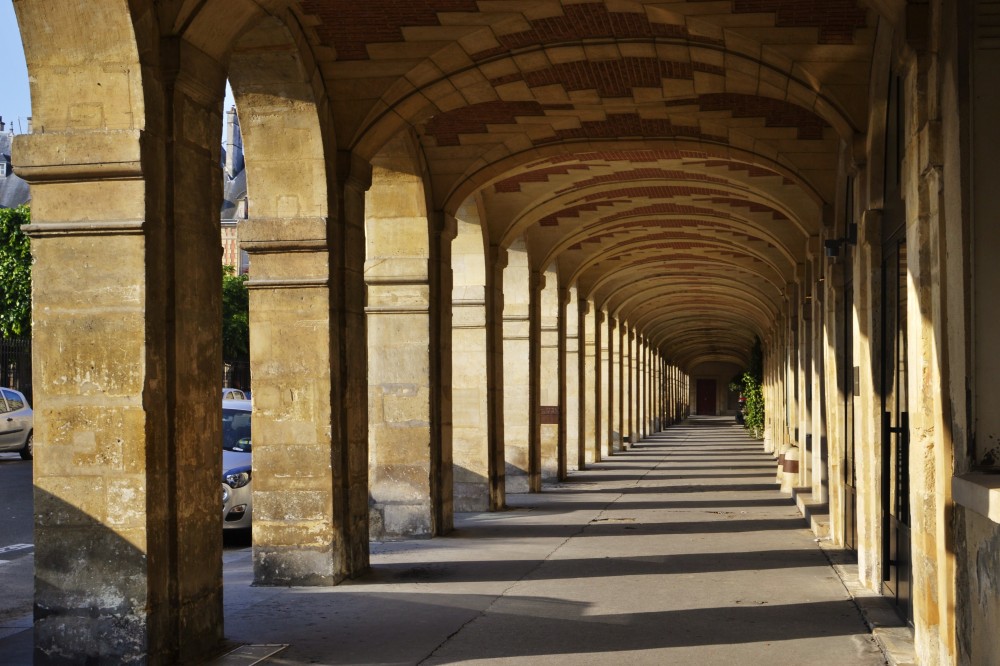 WALK: After breakfast, hold back on staring at paintings in museums and inhale Paris for a while. Weave through le Marais and its infinite shops – jewellery, clothing boutiques, art galleries, chocolatiers, patisseries. Turn south and walk west along the river until you reach the Louvre.

LUNCH: Le Fumoir, the jazz era restaurant has never failed anyone- refined but relaxed and the food is worth every cent. Its lunch performance is as mesmerising as dinner’s, and has remarkably dodged the Time Out Crowd, despite being next to the Louvre. The Polenta dish is worth a try- even the bread is gooey and delicious. The sun spills in through the huge windows during the day and you’ll spot some serious movers and shakers reading the papers or meeting clients. Victoria Beckham is a fan. 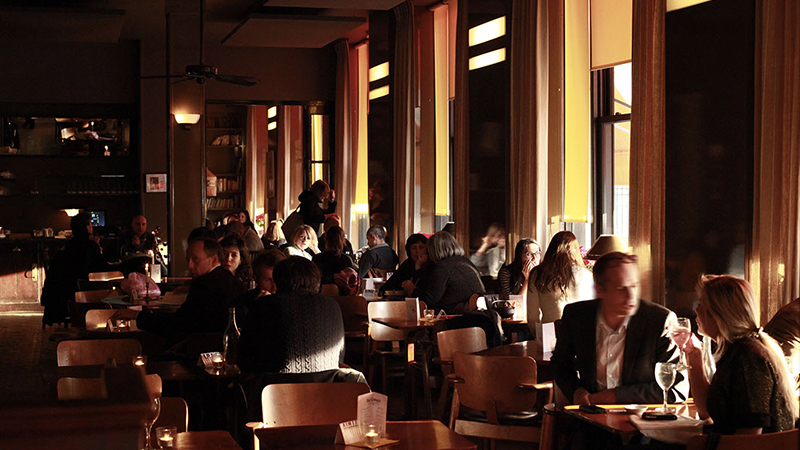 CULTURE: Walk down through the Louvre and cross to Rue Saint Honore. This is one of Paris’ smartest shopping destinations, where you can enjoy dipping in and out of boutiques wistfully. Towards the end of the street is Colette, the infamous shop hosting ‘everything and anything new’. Once you reach the end of Rue Saint Honore, turn South and cross over into the Tuileries gardens, walking up towards the Louvre and stop for a coffee in the gardens. If you have the time and the energy, visit the colossal museum or for a lighter option, opt for Napoleon’s apartment, with its ornate interiors and throwback to Imperial France.

Cross the bridge and head towards Saint Germain, once the bohemian quartier, now the elegant and expensive epicentre of art galleries, luxury shopping and smart cafes. It’s best to avoid the likes of Café De Flore, and all the other Time Out specials. Opt instead for a weaving session, in and out of the streets – via 56 Rue Andre for the crepe of your life – before finishing up at the legendary Deyrolle. This off-the-beaten-track treasure trove of taxidermy has been open since 1831, with two floors of every exotic animal under the sun. You can buy beautiful mounted butterflies in a framed box or beetle paperweights in their gift shop– beats an Eiffel tower key ring as a souvenir. Walk to La Palette, a painfully Parisian café near Saint German-des-Pres where you can sip on a glass of rose in the sun or snuggle under the heaters with a hot chocolate if it’s cold. This is the spot for observing how the Parisians live, greet each other, relax, dress, argue… 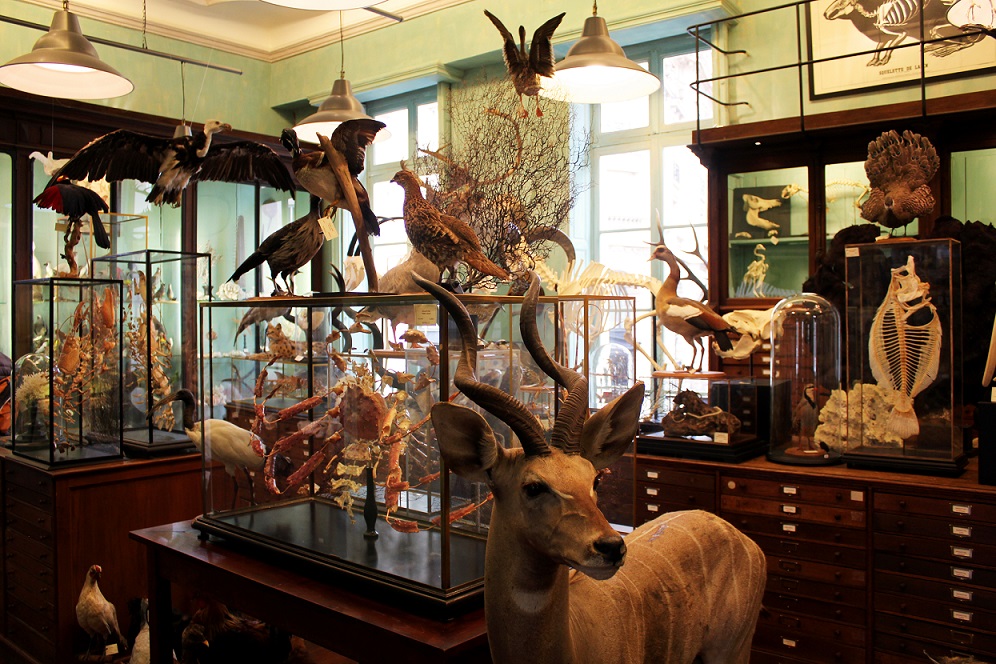 WALK: dress fairly smart, nothing overboard and walk towards L’opera in the 2nd arrondissement, a majestic sight when lit up, steeped in history and Phantom of the Opera tales. At this point you can either give in and order an uber if you’re in heels or persevere to see Paris at night, walking all the way to Monmartre, past the Moulin Rouge.

APPETISER: Go up to the top floor of Terrass-Hotel in the old red light district and Paris’s place of the moment. At its vivacious core, Montmartre is filled with bars and restaurants that stay open till the early hours, in the fringes, near le Sacre Coeur, Montmartre represents a gentrified bohemia – the old gritty Paris, now lined with discreet, quaint restaurants and boutiques breaking up the elegant buildings. From Le Terrace, you can see most of Paris lit up, avoiding the Eiffel Tower crowds or overpriced and underwhelming French cuisine. The cocktails in this bar are eccentric and incredibly strong, served with an impending lift ride down to the ground floor. 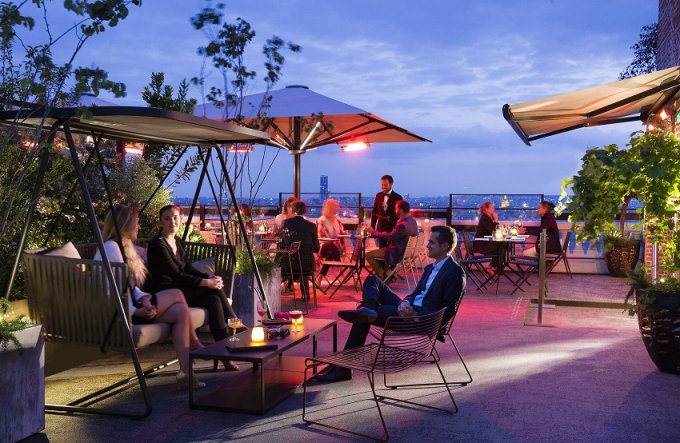 DINNER: a 5 minute quaint walk away and you’ll reach le Moulin de Galette, an elegantly unfussy restaurant with exquisite French food and a local, well-heeled crowd. You can arrive early for a drink at their bar, placed so that you are overlooking the restaurant.

BARS:  Persifleur is a fun, upbeat bar for an apres. It’s easy to get a drink here as the majority of the Parisians are parked outside chain smoking. 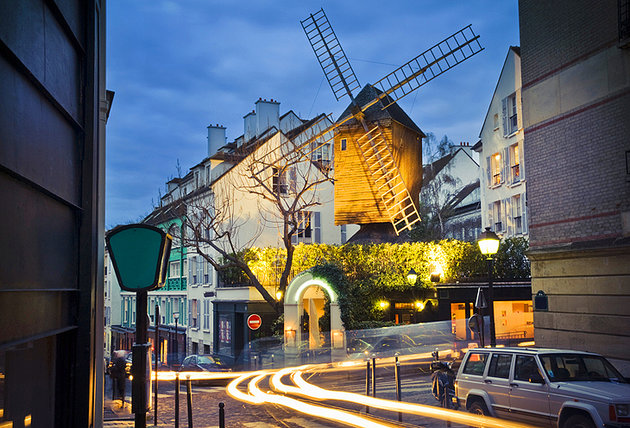 BRUNCH: Wake up and clear your head with a stroll through Les enfants rouges, once a 16th century orphanage and now a luxury food market within an imposing wooden edifice. Food options are endless, from artisan food stalls to Lebanese nibbles… it’s all there and so atmospheric on a Sunday morning. If that’s not enough and you feel like a sit down, tuck into the endless choices of crepes at Breizh café but make sure you book before as it’s packed on a Sunday. 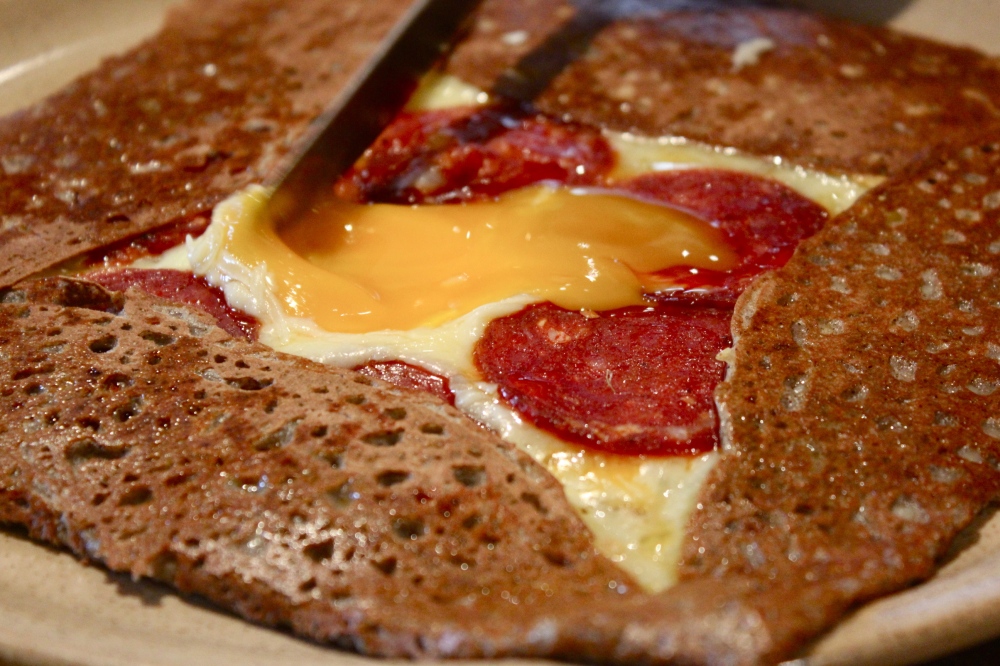 CULTURE: Walk off the nutella, banana and butterscotch pancakes in the Picasso Museum, literally round the corner. The 17th century building, ‘Hôtel Salé is an exquisite private mansion owned by the city since 1964, and housing one of Paris’ most coveted art collections. The Spanish artist spent much of his life living and working in Paris – the museum is well worth a visit if you are in the area. If Picasso wets your art appetite, make the Pompidou your next stop where you can either marvel or frown at the modern pieces, each invoking a reaction at the very least. 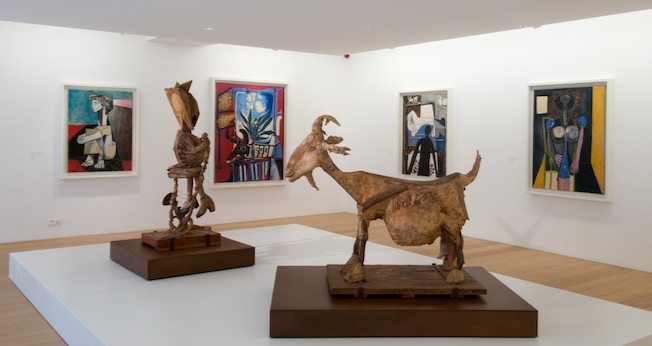 SHOP: It may not be cultural but it’s necessary when in Paris, Come on Eileen is a vintage shop which requires a beady eye and patient companion. You will find gems, Parisian gems that none of your contemporaries own or will ever own. From Chanel suits to Celine sunglasses, it’s all there in this Parisian treasure trove that will engulf you for hours. Top tip: the owner is kind if you buy in bulk so do barter. Take your shopping prowess south of the river and apply it to the St Germain/St Michel area. Note that a fair amount of french shops close on a Sunday (two hours for lunch on most days and often Wednesday afternoons too).

VISIT: Investigating a graveyard on your weekend break may sound strange but Pere Lachaise Cemetery attracts intrigue for a reason. Established in 1803, this was Paris’ first garden and municipal cemetery, home to some of Paris’ greats. Be humbled by Proust or Oscar Wilde’s tomb, and simultaneously amazed and repulsed by the ostentatious, ornate tombs of the wealthy forming this 44-hectare sculpture garden. The eerie beauty of the place will stay with you. 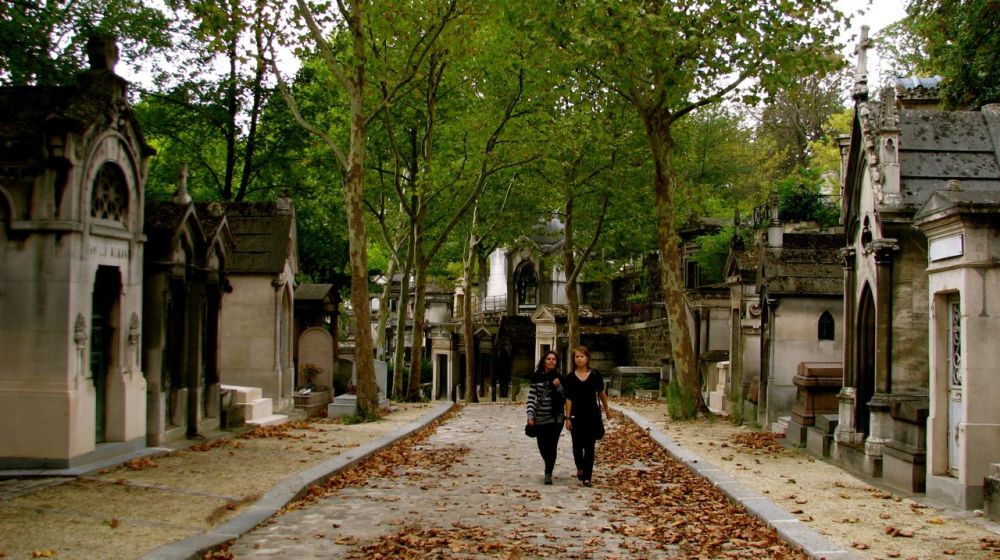 RELAX: If the weather permits and you have time to spare, Jardin de Luxembourg hosts Paris’ relaxation on a Sunday afternoon, reading, lying on each other, perching on the edge of water fountains, all surrounding the elegant Palace du Luxembourg. It’s far less touristy than Jardin des Tuileries.

DINNER: Instead of a heavy supper, opt for Chez Prune’s meat or cheese boards before your Eurostar. It’s a young, buzzy crowd and the wine will aid your impending two hour nap. Alternatively, if you wish to situate yourself as close to Gare de Nord as possible, Chez Casimir is one of limited options in that specific area. This restaurant couldn’t get more french and is the perfect note to leave Paris on. Duck confit and a generous glass or two of vin rouge. 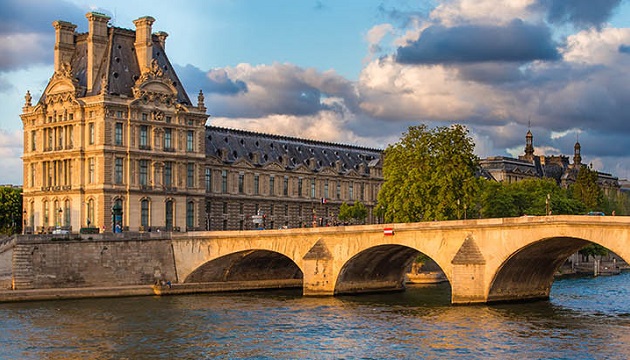